Related items
You are here: Home | Events News | Are you ready for EuroShop?

Are you ready for EuroShop? 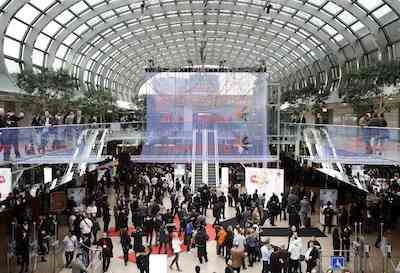 The countdown to Europe’s biggest retail trade show has begun, with more days and exhibition space added to regular features, including best-practice presentations and seminars

Organisers of the EuroShop retail trade fair, which is coming to Düsseldorf from 16 to 20 February 2014, are gearing up for their busiest event to date.
Held every three years, EuroShop 2011 topped out at 108,000 square metres (sqm) of exhibition space. But, due to high demand among international suppliers of retail equipment, EuroShop 2014 will for the first time occupy 16 rather than 15 halls of Messe Düsseldorf.
The show is also introducing for the first time a different running order for the event – from Sunday to Thursday, rather than Saturday to Wednesday. The shift responds to requests voiced in participating sectors from both exhibitors and visitors alike that the event covers more of the working week, according to organisers.
The technology and central information systems (CIS) part of the show will take up their customary location in Halls 6 and 7a, where the e-commerce theme of the fair will be widely featured both at the EuroCIS exhibitor stands and in the associated Multichannel Forum of retailer and vendor seminar presentations.
Expanding retail store remit
Posting particular growth, the EuroShop segment EuroConcept, including shop fitting, lighting and cooling cabinets, as well as the EuroExpo segment will also expand its show footprint.
The booming retail lighting sector will also be given a special area entitled the ‘Lighting Designers’ Zone,’ to showcase lighting designers for the first time. The ‘Mannequin City’ concept will be developed in the visual merchandising area and a ‘Design Boulevard,’ cutting diagonally across the area, with various lounges, an event stage and young talent promotion, will complement this key area of retail store investment.
Hans Werner Reinhard, deputy managing director at Messe Düsseldorf, commented: “The conversations we had with exhibitors and retail experts show that EuroShop is the unrivalled No. 1 trade fair worldwide for all retail investment needs. Enterprises deliberately align their product innovations and product portfolios with the EuroShop dates.”
Sharing best retail practice
With high-calibre speakers, the event’s forums, such as the EuroShop Forum Architecture & Design, the ECO-Forum, the EuroCIS Forum and the POPAI Forum, as well as the EuroCIS Multichannel Forum (all with German/English simultaneous interpretation), or Specials like the EuroShop Designer Village and the POPAI Village, will all complement attendees’ exhibition and networking activities.
The Retail Design Conference including the EuroShop Retail Design Award ceremony and the presentation of the Retail Technology Awards Europe (reta) will also once again take place in parallel with EuroShop 2014.
Visit EuroShop 2014 Visitor page for more information. Or read on for some tips on getting to next year’s event.

Getting to Düsseldorf is easy

The Düsseldorf Exhibition Centre was designed to make it easy for the exhibitor and the visitor to do business. Not only is it easy to get to by road, air and rail, it is also thoughtfully located close to a city of character and substance, both relaxing and entertaining. So when the main purpose of the visit has been achieved, there is ample opportunity to unwind in comfort and style. And, as a visitor, if time is against you it’s possible to take an early morning flight to Düsseldorf, meet the exhibitors you need to see at the show and fly out again – all in a day if necessary.
Most visitors from the UK travel to Düsseldorf by air. There are direct, non-stop flights from the major UK airports by easyJet, Aer Lingus, Lufthansa, British Airways, Flybe, Ryanair, Air Berlin and Jet2. Many other airlines fly indirect to Düsseldorf.
The flight times from UK to Düsseldorf International Airport are between 1 hour 20 minutes and 1 hour 45 minutes depending upon the airport of departure.
Ten-minute taxi ride…
There are numerous taxis at the airport and the Messe (Düsseldorf Exhibition Centre) is approximately 10 minutes ride away. Düsseldorf has the second-highest concentration of taxis anywhere in Germany. So you'll have no trouble hailing a cab any time, day or night, to get you safely to your destination.
…Or take the bus from the airport
Düsseldorf Airport is just three kilometres from the Düsseldorf Exhibition Centre so you can reach it in a matter of minutes by taking the no. 896 bus from the clearly-signposted bus stop at the airport.
Arriving by rail
Taking a Deutsche Bahn train is a relaxing, reasonably priced, environmentally friendly way of getting to Düsseldorf. The central railway station at Konrad-Adenauer-Platz is located in Düsseldorf's city centre and is one of the most modern in Europe.
Arriving by bus and tram
Travelling by bus and tram to the exhibition centre is easy. The Rheinbahn public transport network covers 1,400 km, reaching virtually every corner of the city. It's highly likely that there's a stop just a stone's throw from your hotel.
Don’t forget…
A visitor exhibition entry ticket will entitle you to free transport on Düsseldorf local public transport i.e. trains, buses and trams.
EuroShop 2014 is open daily to trade visitors from 10.00am to 6.00pm from Sunday, 16 February 2014 to Thursday, 20 February 2014.
One-day tickets cost €60 (€42 when purchased online beforehand as an e-Ticket); two-day tickets are €80 (€60 when purchased online) and season tickets are €135 (€115 online). Students and trainees pay €20.
Arriving by public transport
EuroShop admission tickets (eTickets) include a free return trip to EuroShop on public transport marked VRR (Verkehrsverbund-Rhein-Ruhr). Visitors can also travel to and from the Düsseldorf Exhibition Centre free of charge on Rheinbahn, Rhine-Ruhr Regional Transport Network routes (2nd class, trains without additional fees in fare zone D and Region South/Süd, as well as VRR), and Rhine-Sieg Regional Transport Network routes (VRS, 2nd class and trains without additional fees).
Arriving by car
North Rhine-Westphalia has a closely woven autobahn network where almost all routes lead to Düsseldorf and the Trade Fair Centre. Messe Düsseldorf is clearly signposted.
Arriving by caravan/mobile home
Heading for the show aboard your travel trailer or mobile home? You'll have space to spare when you park! We have over 600 bays located adjacent to the exhibition show ground with power connections.
Hotels and travel packages
Contact Düsseldorf Marketing & Tourismus for advice and an individually tailored offers to suit your requirements on messe@duesseldorf-tourismus.de or +49 (0) 211 /17 202 839