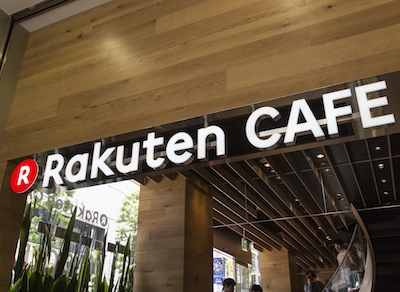 Rakuten, Inc. opened the doors to its first flagship ‘Rakuten Café’ in Shibuya, Tokyo at the end of May.
Designed by art director Kashiwa Sato, the café is described as an offline extension of the company’s suite of internet services.
The new venture, which mixes traditional and modern Japanese aesthetics, enables customers to shop online and buy menu items influenced by its Rakuten Ichiba B2B2C e-commerce platform.
In-café services
The café accepts multiple payment methods, including Rakuten Edy touch payments and Rakuten SmartPay mobile credit card payment.  Rakuten Ichiba’s most popular desserts are available for purchase, including light meals and drinks, both alcoholic and non-alcoholic. Menu items such as coffee and tea are half price when paying with the Rakuten card.
Kobo eReaders are located throughout the café for customers to use. In addition, they can also avail of 1 Gbps free WiFi and of the complementary use of power sockets and mobile phone chargers for online shopping.
The café, which is located in the city’s youth and fashion hub, is described as an additional marketing channel for Rakuten Ichiba merchants.
Global expansion
The company, which recently acquired IM application Viber, is expected to welcome more international sellers to its platform this year. It had already predicted major mobile growth of its online sales back in 2012, the same year it bought Canadian e-book reader company Kobo.