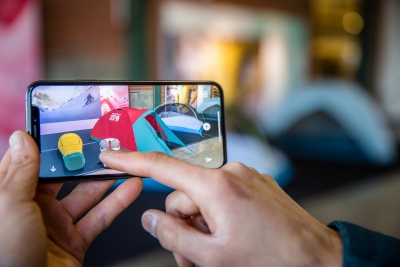 The app features equipment for Summer 19, as well as technical apparel for Winter 19, such as its Exposure/2 GORE-TEX collection – a partnership that puts Mountain Hardwear first to develop a user-friendly AR experience for outerwear.
A consumer AR app has already been launched in the US and plans are also underway to offer the app to European consumers.
In developing this technology, the team at Mountain Hardwear identified several obstacles in the buying experience that they believe keep customers from getting outside: limited time to spend in retail stores, difficulty of in-store setup, store availability, and guesswork about online assets.
Additional assets
While many have been quick to jump on the AR bandwagon, apps commonly have confusing interfaces and low-quality imagery.
With the help of creativity agency Transparent House, AR renders of Mountain Hardwear products feel as if they’re right in front of you.
“We believe technology is something that should be thoughtfully applied, not used because it is trendy,” said David Scott Van Woert, director of business development, Mountain Hardwear. “The result is an app that is as enjoyable to look at as it is intuitive to use. But more importantly, it is an app that makes sense.”
Mountain Hardwear will continue to roll out additional assets to expand its virtual gear closet. Retailers can expect to download a fully-functional app later this year.